On Wednesday, 17th March a food safety conference was organised by the Association of Journalists Specialised in Agriculture (Agropres) in cooperation with the United States Agency for International Development (USAID) and with the support of the Ministry of Agriculture, Forestry and Water Management, and it was held at the premises of the Continental Hotel.

The aim of the conference was to point out a need for high level of human health and life protection, and a need for the protection of consumer interests including the principle of fair and conscientious trade in food and protection of animal health and welfare, as well as plant health and environmental protection. During his opening address, Goran Đaković, Chairman of the AGROPRESS, said that the media worldwide paid great attention to the issues such as environmental and health protection, and emphasised the importance of the role of media in promoting and informing the public about the benefits and deficiencies of certain solutions in terms of the improvement of quality of food we put on our tables. The importance of media can always be seen when producer-distributor-consumer chain monitoring reveals to the public illicit activities of food industry, emphasised Mr Đaković.

The following persons gave speeches at the conference: Saša Dragin, Minister of  Agriculture, Forestry and Water Management, Merilyn Schmidt, USAID Deputy Mission Director, Ronald van Dartel, Dutch Ambassador to the Republic of Serbia, Ljiljana Stanković, Assistant Minister at the Ministry of Trade and Services, Miloš Bugarin, President of the Serbian Chamber of Commerce, Dušan Pajkić, Director of Inspectorate General, Dejan Krnjaić PhD, ATS Director, Alberto Kamarata from the EC Delegation to Serbia, and other equally important participants in food production, processing and inspection, other than representatives of the public administration and foreign delegations.

“Food safety system that is being built in Serbia is harmonised with the most stringent European norms and even the most developed countries of the world would not be ashamed thereof”, said Saša Dragin, Minister of Agriculture, Forestry and Water Management, and added that the Food Safety Law would, as an umbrella law governing that area, be complete when the accompanying sub-laws had been adopted. According to his words, only last year there were 170,000 inspection visits to food producers, distributors and traders and more than 6,000 different types of penalties were imposed.

The Director of Inspectorate General within the Ministry of Agriculture, Forestry and Water Management, Dušan Pajkić, explained the provisions of the Food Safety Law in detail and announced adoption of the Regulation on Composite Food that will define competences of inspection services for food of animal and plant origin. Mr Pajkić announced that another regulation on the establishment of the central register of food producers and traders.

Alberto Camarata, Chief of Economic and European Integration Section of the EC Delegation to the Republic of Serbia, explained the method of inspection of food quality in the EU Member States by presenting new models of inspection that would soon be adopted by the EU.

Due to free movement of goods and services, and removal of technical barriers to trade on the world single market, accreditation becomes ever more important every day. The proof thereof can be found in the new EU legislation, i.e. definition of accreditation as an activity of public interest, emphasised Dejan Krnjaić PhD during his address. The national accreditation body as an independent and impartial institution will use accreditation to confirm and monitor the competence of CABs.

Serbian food products will have, by implementing food safety management system and by observing legislation governing this area that also provides significant definition of accreditation process, easier access to the European market and will be more competitive thereon, said Mr Krnjaić and added that the public, market and exporters could, by observing standards, be sure that these products were safe and quality ones.

He emphasised that food was the most demanding product in terms of provision of quality, consumer safety and protection on the European Single Market, and that it was necessary for impartial and professional bodies assessing conformity of food with relevant standards and regulations to take part in food chain, and that it was necessary to ensure quality and protection of human health and life, protection of animal and plant health and life, environmental protection and prevention of fraudulent practices.

Since Serbia made a profit of two billion $ last year by exporting agricultural products, and a surplus of 640 million RSD, and since more than 50 percent of the products are exported to the EU Member States today, it is clear how important it is for the Accreditation Board of Serbia to become a full member of the European Cooperation for Accreditation as soon as possible and a signatory to the Multilateral Agreement on the recognition of results and certificates (EA MLA), emphasised the ATS Director. 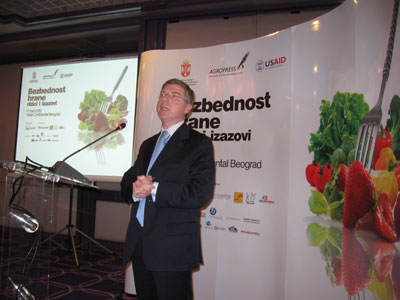 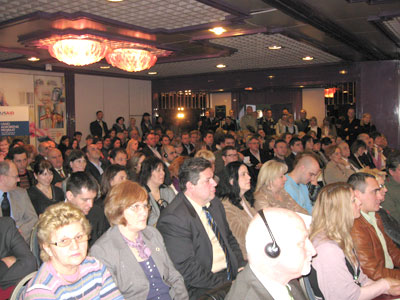