Two meetings (27th and 28th) of the EA General Assembly were held in 2011 – one was held in Berlin in the period between 25th and 26th May 2011 and it was organised by the German Accreditation Body (DAkkS), while the other one was held in Warsaw in the period between 23rd and 24th November 2011 and it was organised by the Polish Accreditation Body (PCA).

The European cooperation for Accreditation’s 27th General Assembly was held in Berlin on 25th and 26th May 2011. The meeting was hosted by the recently formed National Accreditation Body of Germany, DAkkS, which at the end of 2009 brought together into one body the different German EA member accreditation bodies. The discussions in the General Assembly were wide ranging but focused on the continued growth and development of EA as the official accreditation infrastructure in Europe. They included proposed work programmes for 2012, and re-confirmation of the EA Strategy for the period up to 2015. The General Assembly also supported proposed EA Strategic Objectives for this period and mandated the Executive Committee to include actions within future work programmes to meet these objectives. Regarding the core deliverable of EA – the Multilateral Agreement (MLA), the General Assembly noted the road map towards accreditation of Verification Bodies under ISO 14065 according to the proposed EU Accreditation & Verification Regulation. It also agreed the interim revision of EA-2/02 (2011): “EA Procedures for the Multilateral Agreement” and agreed that work would continue on a more comprehensive revision. It was agreed that a new activity would be defined at Level 2 of the MLA called “Verification”. The General Assembly also resolved that this activity would be based upon ISO 14065 for environmental verifiers thus defining ISO 14065 as the Level 3 standard under the activity “Verification”.

The MLA Council will also include the contents of the paper agreed by the General Assembly stating EA’s position on “Evaluation of the impartiality and objectivity requirements of ISO/IEC 17011 with particular focus on governmental national accreditation bodies” into the training process for all EA peer evaluators to ensure common understanding and harmonisation of approach. Some new work items were approved and a number of documents identified for revision:

• Surveillance of subcontractors to conformity assessment bodies (CABs) in order to harmonise the implementation of practices among EA members
• New guidelines on inter-laboratory comparisons with few participants
• Revision of EA-1/06: The EA MLA
• Revision of the EA Training Guides EA-3/05, EA-3/06, and EA-3/07 by replacing the three documents with a single document including training for all accreditation activities
• Revision of EA-4/09: Accreditation of Sensory Testing Laboratories
• Revision of EA-4/15: Accreditation for Non-Destructive Testing.
The General Assembly endorsed the withdrawal of EA-2/10: EA Policy for the Participation in National and International Proficiency Testing Activities and adopted ILAC P9:2010 as a mandatory document for all EA Members.

It was also agreed that the revised version of EA-3/01: “Conditions for the use of accreditation symbols, text reference to accreditation and MLA signatory status” shall contain a mandatory requirement for National Accreditation Bodies (NABs) to refer to the EA MLA on their accreditation certificates, encourage NABs to refer to “EA MLA Signatory” in conjunction with their logo, and to encourage NABs to develop a policy allowing accredited conformity assessment bodies to refer to the EA MLA in combination with the accreditation symbol on reports and certificates issued under their scope of accreditation. A policy on how accreditation bodies should respond to competitive tenders for accreditation was considered in order to maintain compliance with both the intent and the detailed requirements of Regulation (EC) 765/08. It was agreed that EA members shall not provide a positive response to any tender aiming to grant accreditation to an organisation established in a country where an EA member exists. However, an EA member may provide an accreditation service to such an organisation if it is requested to do so by the National Authority in the Member State of the applicant and in agreement with the national accreditation body that is local to the applicant organisation for reasons allowable under Article 7 of Regulation (EC) 765/2008. The General Assembly also confirmed its position that ISO 22005 (Traceability in the feed and food chain – General principles and basic requirements for system design and implementation) is not a standard to be used for accreditation.

28th meeting of the EA General Assembly was held in Warsaw in the period between 23rd and 24th November 2011.

During a two-day meeting a large number of questions were discussed to include those that pertain to the cooperation with the European Commission and EFTA, implementation of the 2010-2015 development plan, activities of the EA technical committees and EA Multilateral Agreement Council (EA MAC), cooperation with the International Laboratory Accreditation Cooperation (ILAC), International Accreditation Forum (IAF), other regional organisations of accreditation bodies, and interested parties.

The following resolutions constitute only a part of the total of 27 resolutions that were adopted at the EA General Assembly meeting:

- ratification of electronic voting results and adoption of the document entitled EA-1/18 - Policy and Procedure for Expansion of the Scope of the EA MLA and EA-6/04 - EA Guidelines on the Accreditation of Certification of Primary Sector Products by Means of Sampling of Sites;
- approval of the recommendations made by the EA Multilateral Agreement Council for the entry of the new full and associate members into the European co-operation for Accreditation;
- approval of the 2011 Annual Report and 2012 Work Programme;
- adoption of the 2012  Financial Plan;
- commencement of the EU peer evaluation process in case of EU Emission Trading System (EU/ETS);
- approval of the EA Strategy for Inter-laboratory Comparisons for the period between 2011 and 2021 and delegation of the task to the EA Laboratory Committee to prepare the necessary documents for the preparation of the Strategy;
- withdrawal of the EA document entitled EA-2/05: The Scope of Accreditation and Consideration of Methods and Criteria for the Assessment of the Scope in Testing and adoption of the document entitled ILAC G18: 2010: Guideline for the Formulation of Scopes of Accreditation for Laboratories as a guideline for EA members;
- adoption of the document entitled ILAC P14 Policy for Uncertainty in Calibration at the proposal of the EA Laboratory Committee that is a mandatory document for all EA members;
- adoption of a two-year transitional period for the accreditation of certification bodies at the proposal of EA Certification Committee and as per the new version of ISO/IEC 20000-1:2011 Information technology -- Service management -- Part 1: Service management system requirements;
- delegation of the task to the EA Certification Committee to start revising the document entitled EA-6/03- EA Document for Recognition of Verifiers under the EU ETS Directive in keeping with the new EC Regulation on Greenhouse Gas Emission Allowance Trading.

At this General Assembly meeting the status of the Accreditation Body of Serbia changed in accordance with the new Articles of Association of the European co-operation for Accreditation and membership criteria laid down in the document entitled EA-1/17 – Supplement 1, and instead of being a signatory to the contract of cooperation it became an associate member of this extremely important international organisation. 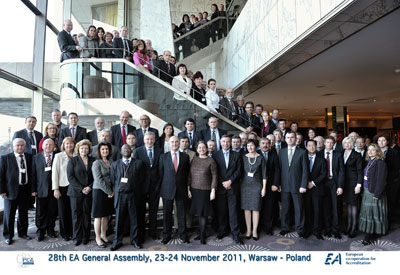