Meetings of the ATS Management Board (MB) and Accreditation Council (AC) were held on 26th December 2013 at the premises of the Accreditation Body of Serbia (ATS).

SAt its fifth meeting AC reviewed the following: Report on the ATS Peer Evaluation Performed for the Purpose of Maintaining and Extending the EA MLA Scope; Report on the Work of International Organisations for Accreditation and Report on Establishment of the Association of Accredited CABs.

ATS Acting Director opened the meeting when she presented an overview of all activities and results that ATS achieved in 2013. She spoke about the ATS peer evaluation performed by the EA team in the period between 9th and 13th September 2013 to maintain the signatory status as regards calibration, testing, inspection and product certification and to extend the scope of the EA MLA to include certification bodies providing certification of management systems and certification bodies providing certification of persons. One of the conclusions related to the fact that AC would provide, as an advisory body, full support to ATS in its endeavours to make the Serbian accreditation system fully operational.

Furthermore, AC appointed new members of Technical Committees for inspection bodies and certification bodies and adopted the Report on the Work of International Organisations for Accreditation. 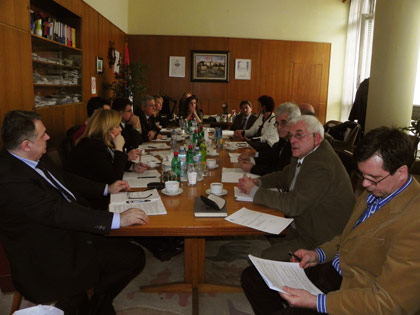