On Wednesday, 15th September a round-table discussion entitled “Safe and Healthy Work Environment” was held as part of the 37th International Fair "112 EXPO – Protection against fire, floods, earthquakes, chemical accidents – reaction to emergencies". It was dedicated to the promotion of new legislation governing standardization and accreditation, ...

and to the presentation of examples of good business practice in companies in terms of occupational health and safety. Ms Vera Božić Trefalt, Director of the Occupational Health and Safety Directorate of the Ministry of Labour and Social Policy, opened the fair and explained that “112 EXPO” Fair served as a proof of raised public awareness of the importance of prevention in the field of emergencies and occupational safety had been raised. She reminded the participants that the number of work injuries in Serbia had decreased in comparison with the same period last year and that the largest number of injuries occurred in civil engineering and industry.

1.041 work-related injuries occurred last year in Serbia, 37 of which were fatal, while in the first eight months of 2010 there were 678 work-related injuries, 18 of which were fatal.
For this negative trend to be diminished a significant improvement in the field of occupational health and safety legislation was made in Serbia in the last two years, and therefore ten European directives were transposed so far, while another five would be transposed by the end of the year.

By presenting the occupational health and safety examples, Ms Korunović said that ISS published 507 harmonised European standards in this field by now which was in accordance with the Machinery Safety Sub-law (Official Gazette No 13/2010) that transposed the Machinery Directive into our legislation (2006/42/EC), and that all 800 standards would be published by the end of the year. Furthermore, she explained that the Ministry of Economy and Regional Development was preparing the PPE Sub-law (89/686/EES) for which 258 harmonised standards had already been adopted (out of the total of 274 harmonised European standards).

Dejan Krnjaić PhD, ATS Director, by presenting the new legislation governing accreditation, reiterated the importance and main objectives of accreditation the application of which enabled endorsement of competence and trust on national and international market and contributed to the upgrade of quality infrastructure in each country.

“Nowadays socially responsible business activities and dedication to sustainable development is a constituent part of many business strategies, while health safety and protection management must be a strategic decision of any company aspiring to attain successful business policy and make profit on the market”, said Mr Krnjaić and explained that raising the level and requirements in terms of occupational health and safety would foster development and integration of sector specific management systems (in the fields such as: motor cars, food, civil engineering, textile, telecommunications, airplanes, healthcare, IT, finances, railway, services, wood, cosmetics, oil and petrol,...) that together with risk management and other management systems provide a solid basis for successful business operations in terms of international companies and big corporations.

Mr Krnjaić introduced the present participants to previous ATS activities focused on the extension of the ATS scope of activities, namely those activities focused on the accreditation of certification bodies performing certification of: occupational health and safety management system (SRPS OHSAS 18001) (one accreditation certificate was awarded and three applications were being processed), and information safety management system (SRPS ISO/IEC 27001) (two applications were received).

While talking about the importance of accreditation from the point of view of public interest safety and protection, and of ensuring free movement of goods and services, Mr Krnjaić emphasised that the ATS set the objective to sign multilateral agreements with members of the European Cooperation for Accreditation (EA) which would be a laborious process, but eventually attainable, and, above all, extremely useful for our economy. “With that end in view on 12th February 2009 we sent a request to the EA for the peer evaluation to be performed”. A pre-evaluation visit was realised in the period between 2nd and 5th of March this year, and on 27th August 2010 we sent an application to EA MLA/BLA for the extension of the scope to include the following fields: accreditation of medical laboratories, certification bodies performing certification of management systems and certification bodies performing certification of products. We expect that the EA peer assessment will follow early in 2011”, said the ATS Director.

More than 80 exhibitors from Serbia, Bosnia and Herzegovina, Slovenia, Russia, Czech Republic, Italy, Austria and Germany took part in this fair that lasted till 17th September. General sponsor was the Emergency Sector of the Ministry of Internal Affairs of Serbia, and one of the sponsors of the fair was the Occupational Health and Safety Directorate of the Ministry of Labour and Social Policy. 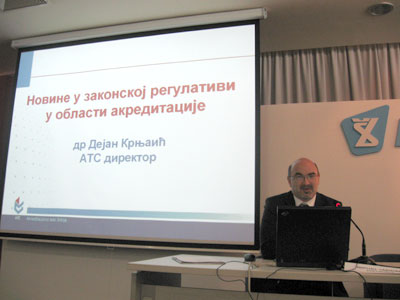 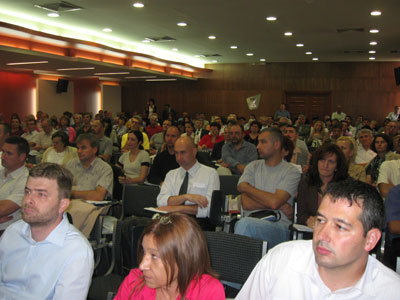