In the period between 29th August and 9th September, a study tour was carried out and Germany, Austria and Switzerland were visited on that occasion as part of Swiss-Serbian Cooperation TCP 2009-2012 and German-Serbian Cooperation 2010. It was organised by Agidea (Swiss Association for the Development of Agriculture and Rural Areas) ...

and GTZ (German Organization for Technical Cooperation). The topic of the study tour was “Accreditation and certification in the field of organic production, GlobalGap and Geographical indications (GI)”.

Representatives of the Ministry of Agriculture, Forestry and Water Management, Accreditation Board of Serbia - ATS, Intellectual Property Institute, SEEDEV, as the coordinator of the Swiss-Serbian Cooperation TCP 2009-2012 and its partners, and representatives of GTZ organizers had an opportunity to get introduced, during this extremely interesting and well planned study tour, to different systems of conformity assessment and inspection in the fields of organic production, quality control schemes in the field of  GlobalGap and GI, and accreditation system.

After the study tour, the ATS will, in cooperation with GTZ and Agridea, this successful cooperation will be continued by organising training sessions and seminars for assessors in the field of agriculture (organic production, GI and GlobalGap), and by providing advice on the occasion of establishment of new schemes of accreditation. 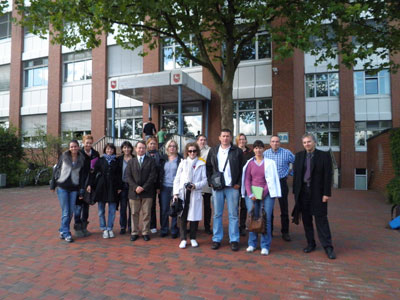