The twenty second meeting of the Communications and Publications Committee (CPC) of the European co-operation for Accreditation (EA) was held in the period between 10th and 11th October 2012 in Paris, France. It was organised by the French Accreditation Body (COFRAC).

The meeting was opened by Daniel Pierre, COFRAC Director and EA Vice-Chair, who wished the delegates a successful meeting.

Vagn Andersen, CPC Chair, introduced the most important information from the previous period and informed the CPC members that the new EA Chair would be elected at the EA General Assembly meeting to be held in November. Furthermore, the MAC Committee Chair and HHC Committee Chair will be elected, and the EA Secretary. 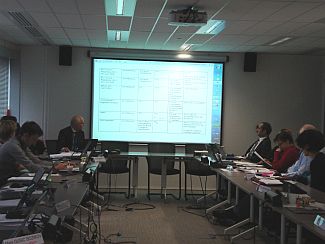 The Report on implementation of Regulation (EC) 765/2008 was presented at the SOGS meeting held on 11th October in Brussels. The main recommendation of the European Commission (EC) pertained to the need to improve the peer evaluation system since ILAC and IAF had identified one nonconformity during the EA assessment relating to the lack of documented programme for the promotion of global arrangements signed within ILAC and IAF. Therefore, it was concluded that EA should develop such a programme that would rely on an experiences from other regions.

Best Practice Guide enables national accreditation bodies (NABs) to have better cooperation with competent authorities and therefore it was discussed at the ILAC and IAF annual meeting held in October in Rio de Janeiro, Brazil.

The purpose of revising the document entitled EA-3/01: Conditions for Use of Accreditation Symbols and Reference to MLA Signatory Status was related to the mandatory reference to EA MLA arrangement in accreditation certificates issued by NABs to conformity assessment bodies (CABs). On the other hand, NABs should have a policy allowing accredited CABs to refer to the EA MLA in certificates and reports issued under the scope of the EA MLA.

The EA MLA Brochure promoting the EA MLA arrangement provides that ILAC/IAF the mode of promoting the EA MLA that NABs sign with ILAC and IAF should be clearly defined in the EA-1/06 document. Furthermore, it was recommended that NABs should promote ILAC/IAF global arrangements. The brochure will not be available on the EA website, but it will be translated into local languages as well. Furthermore, the EA MLA Annual Report 2012 was published for the very first time in which a special emphasis is on the need to improve the peer evaluation system and significance that the system has for the EA members.

Structure of the EA website will also be re-developed, including EA members only section. This project will be carried out in two phases. The first phase will involve a re-development of the public internet site, and it will be followed by the development of the intranet in the following year to involve transfer of the web platform to the technology that allows the Secretariat to control the site, the structure will be improved to make the site easier to navigate, and to improve the look and feel to reflect EA’s status as a European ‘Institution’. Early stage work has started to consider refreshing the EA logo. Additionally, EA should put up a newsletter on its Website that will include the latest information related to the work of EA and accreditation bodies in Europe.

Regulation 600/2012 was also discussed during the meeting given that it explains that the accreditation scheme based on ISO/IEC 14065 is to be mandatory. The Regulation shall enter into force on 1st January 2013. This implies that EA MLA should include the accreditation of GHG verifiers. However, NABs have to set up and manage a database (EA ETS) and allow other national accreditation bodies, national authorities, verifiers, etc. to access that database. In parallel, EA shall provide access to the said database so that data on accredited verification bodies (VBs) and countries in which those VBs are performing verificationcould  become publicly available, and data on VB’s accreditation scope. It was clarified that the database shall serve two purposes for 2 different target groups in a transparent manner: publicize which NAB can accredit verifiers in order for VBs to search for accrediting NABs; publicize which VBs are accredited (and where) in order for relevant authorities to make control. It was agreed that the CPC should elaborate on recommendations for establishing the EA ETS database. This databse shall have two functions and will be intended for two different target groups – it must be published what NABs can accredit verifiers so that verification bodies could find such data, while the data on accredited verification bodies and countries in which they were accredited shall be published so that the competent authorities could perform controls. Additionally, it was agreed that the CPC members would define recommendations for setting up this database.

The first EA e-bulletin was published on 12th July 2012 and it focused on the key items discussed at the EA GA in May. Another e-bulletin should be prepared after the November EA GA meeting in Bratislava.

Members of CPC Committee were delegated a task to develop brochure that will explain a procedure for resolution of complaints and appeals within EA. This procedure is described in the document entitled Supplement 3 to EA-1/17, EA Rules of Procedure – EA Procedure for the investigation and resolution of Complaints and Appeals. The purpose here is to publish information material on the EA website to inform the marketplace on the role of EA and possible outcomes of EA complaint and appeal resolution with special reference to available tools used for this purpose and types of decisions that can be expected from EA in this context.

In terms of ILAC and IAF news the CPC members are responsible for collecting the articles and delivering them so that they can be published in the next IAF Newsletter, given that it is very important to include the news from Europe. Furthermore, the major work was done for the re-development of the ILAC website. The draft specifications were considered at the meeting of ILAC and IAF in October in Rio de Janeiro, Brazil.

Good cooperation with EA professional organisations and stakeholders is of huge importance and it is therefore necessary to develop a strategy for improving the cooperation especially with the stakeholders. CPC members should share data on stakeholders from their countries with EA Secretariat.

At the end of the second day of the meeting, the workshop dedicated to the upgrade of the database search engine for accredited CABs on EA’s website (EA Search Facility Workshop) was held in order to link the key words with all activities of accredited CABs. The workshop was led by Martine Blum, EA Secretary, who reported the current state and future activities in this area to the delegates.

In accordance with the brand new programme entitled “Art of Accreditation” that enables presentation of an activity/masterpiece in different artistic and communication forms at each meeting, Vitaly Bohaievsky, representative of the Ukrainian Accreditation Body (NAAU), handed over a painting representing the COFRAC logo to the COFRAC Director. 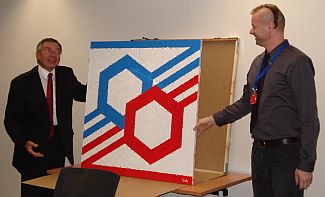 The next CPC meeting will be held in the period between 10th and 11th April 2013 in Bucharest, Romania, and it will be hosted by the Romanian Accreditation Body (RENAR).

Jasna Stojanović and Katarina Bogojević attended the meeting on behalf of the ATS.