32nd meeting of the General Assembly of the European co-operation for Accreditation (EA GA) was held in the period between 20th November and 21st November in Oslo, Norway, and was hosted by Norwegian Accreditation (NA).

19 resolutions were adopted, whereas the most important ones are as follows:

- The General Assembly ratified the results of the electronic ballots as regards the adoption of EA-6/02 M 2013: EA Guidelines on the Use of EN 45011 and ISO/IEC 17021 for Certification to EN ISO 3834, EA-4/02 Evaluation of the Uncertainty of Measurement In Calibration and EA-1/06 EA Multilateral Agreement Criteria for signing Policy and procedures for development;

- EA GA adopted the Report produced by the EA Quality Manager, Biserka Bajzak Brezak (HAA), that informed EA GA, among other things, about the current activities as regards the merger of EA and EA MAC Secretariat (deadline: April 2014), and about the results of internal audits and plans for the following audits, on-going amendments to the management system documents (revision of the EA -0/00 document), and about the closure of nonconformities from previous internal audits and results and plans for the following reviews;

- EA GA agreed that EA should apply to IAF to extend the scope of EA as recognized region to the new main scope “certification of persons” based on ISO/IEC 17024, and asked for including the necessary peer evaluation in the forthcoming peer evaluation of EA by IAF/ILAC;

- EA GA agreed that EA should apply to IAF to extend the sub-scope of EA as a recognized region for the sub-scopes FSMS, ISMS and Medical Devices MS under the main scope (level 3) “certification of management systems” based on ISO/IEC 17021. EA considered it necessary that discussions should be continued in IAF with a view to change and remove the sub-scope-based structure of the IAF MLA and that an appropriate, workable system should be in place to perform the appropriate witnessing activities while minimizing the efforts of the regions and their Members. Outcome of EA peer evaluation activities for the relevant fields will be collected to be made available to the ILAC/IAF evaluation team, the ultimate objective being to increase confidence in the evaluation system to demonstrate that sub-scopes are not needed. It is assumed that this extension will cease to be necessary after the scoping rules within IAF have been revised based on the proposed strategic direction;

- EA GA mandated the Executive Committee (EA EX), in compliance with EA-1/20 A:2012, to review and adjust the activity-based budget 2014 approved in May 2013, as well as to revise the Work Program 2014 and the EA Plan 2014-2017 as necessary concerning the specific actions and operational tasks of EA under the FPA; then to present the revised activity-based budget 2014, Work Plan 2014 and EA Plan 2014-2017 to the General Assembly for endorsement, which could be realized by email if necessary;

- EA GA acting upon the recommendation from the Executive Committee, approved the revised fee schedule for 2014 and proposed new EA membership fee formula to first apply for the 2015 EA membership fees;

- EA GA, acting upon the recommendation from the Horizontal Harmonization Committee (EA HHC), endorsed the withdrawal of EA-1/18 A:2011:Policy and Procedure for Expansion of the Scope of the EA MLA further to the adoption of revised EA-1/06 A AB:2013: EA Multilateral Agreement: Criteria for Signing - Policy and Procedures for Development, which now integrates the content of EA-1/18;

- EA GA agreed that the Horizontal Harmonization Committee should start a new work item to develop an EA document on surveillance assessments;

- EA GA, acting upon recommendation from the Certification Committee, adopted the following IAF documents as mandatory documents for all EA Members: IAF MD5:2013, IAF MD10:2013 and IAF MD12:2013, and adopted the IAF ID5:2013 document as an information document. 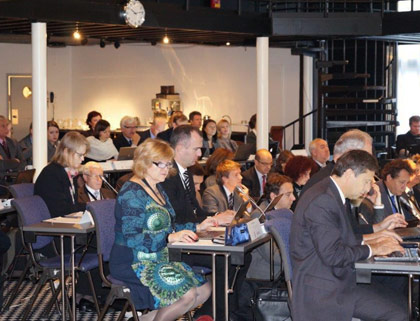